How China & Blockchain Will Dominate

Will Western Countries be left behind with a one party controlling system> With Blockchain Technology there will be many ways China will be able to oversee the manufacturing process both in military and public sectors.

BEIJING, Nov. 10 (Xinhua) — China’s spending on blockchain technology will see rapid growth in the coming years to reach over 2 billion U.S. dollars in 2023, a report by global market intelligence firm IDC showed.
The country’s expenditures on blockchain technology will see a compound annual growth rate of 65.7 percent from 2018 to 2023, the company estimated.
In 2019, most of the country’s blockchain spending went to the banking sector, while discrete manufacturing, retail, professional services and process manufacturing were among the top industries that attracted blockchain spending.

Will this process allow China to surpass the West? 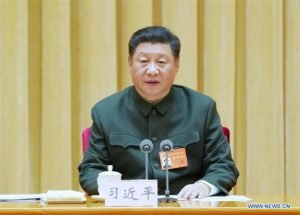 BEIJING, Nov. 10 (Xinhua) — Chinese President Xi Jinping has stressed efforts to promote all-around progress in developing the military at the primary level.
Xi, also general secretary of the Communist Party of China Central Committee and chairman of the Central Military Commission (CMC), made the requirement while attending a CMC meeting held in Beijing from Nov. 8 to 10

For Western societies, blockchain is transformative in that it can be used to distribute power, which in turn can promote rule of law, fight corruption and crime, and protect digital identity and privacy.
That’s not how Beijing sees it, though. If China can be first and build a blockchain system it controls, such as it did with its state-controlled Internet, Beijing will be able to use the technology to repress its people, expand its influence and subvert the Western rule-of-law-based system. Blockchain development is part of China’s “13th Five-Year Plan.” The Chinese government has invested billions in blockchain partnerships with Chinese firms. Through 2017, China filed more blockchain-related patents than any other country. China’s People’s Liberation Army is already working on how to weaponize blockchain for “gray zone” attacks, meaning cyber and information warfare. For example, Beijing could build a closed blockchain to manage the flow of goods, services and funds through its multitrillion-dollar Belt and Road Initiative. Everyone would have to use that system, and the Chinese government could abuse its control by inserting back doors — enabling data theft, intelligence gathering, cyberattacks and more. If the Chinese government is able to control the way blockchain is developed and governed worldwide, that would be a grave and long-term threat to U.S. and international economic and national security

How Blockchain Works for Military

If governments in the west cannot implement Blockchain Technologies in the manufacturing process what will happen of something major happens militarily? Will China be able to look at every process of supply chain and be able to ramp top military production faster than any other country by far? There are many reasons for blockchain to make things better for the average person such as food chain supply and tracking fish from the sea to your plate but it could also be implemented to find materials to make weapons of war quicker than any other system. Tracking rare earth materials and other heavy metals and be able to move them to factories via supply chain management in times of emergency could mean the difference to the outcome of War. There are expected to be more than 130 robots per 10,000 people in China by 2021, according to the International Federation of Robotics.

Given that blockchain now features heavily in any discussion about cybersecurity, it is unsurprising that military organizations across the world are taking an interest. Secure communication is one example of how blockchain military applications are proving their potential.
Blockchain can record the data collected by AI-powered drones immutably and in real time. It can also record the flight decisions and actions taken by the drone. With each drone operating as part of a decentralized network, then if it is later destroyed, whatever it has collected or performed would still be recorded on the blockchain. Blockchain allows decentralization of computing power across multiple nodes. Decentralization has clear advantages for powering a system such as Aegis, leading to speculation that blockchain is the future of battleship control systems. By utilizing blockchains ability to verify that all nodes are working from the same set of data, the system can coordinate weapon control to neutralize threats.

How Blockchain Works in Military

India
India’s defense industry is undergoing “a churning to cope and employ these technologies, in order to safeguard the safety and security of critical infrastructure,” according to Defense Minister Rajnath Singh on Nov. 3, as reported by the Times of India.
Meanwhile, scholars in India are concerned about blockchain supporting the conduct of military operations. According to Global Security Review, “With one author recognizing that as governments and individuals develop quantum computing abilities, blockchain will make it easy to hack into highly secure networks.” When Indian Defense Minister Rajnath Singh said that blockchain and artificial intelligence would “revolutionize war,” as Cointelegraph reported on Nov. 4, did he take things a bit too far?

Jet engines have revolutionized warfare, and so have missiles and nuclear weapons — but shared digital ledgers? The Department of Defense, and other U.S. security agencies, still doesn’t appear to have a clear, integrated strategy for incorporating blockchain into their operations, though use cases appear to be emerging piecemeal.
In September, for instance, the Department of Homeland Security awarded $143,478 to Vienna-based firm Danube Tech to develop blockchain security solutions, including digital documents like passports and green cards to be used at border crossings or in airports.
But according to what Markus Sabadello, the CEO of Danube Tech, told Cointelegraph, it isn’t far-fetched to see how a military organization could issue a digital identity for all its soldiers to establish their credentials, including their rank. Commanders could send orders through the decentralized digital network, and soldiers could verify who the message came from. The enemy would find it difficult to forge false identities, as all of them are registered on a blockchain, and there would be no one central server that the enemy could hack.

China
According to Deloitte’s 2019 Insight Global Blockchain Survey, China — more than any other country — will use blockchain “strategically instead of tactically,” according to Paul Sin, consulting partner at Deloitte Advisory. Moreover, 34% of Chinese respondents in the 2019 survey strongly believe in the disruptive potential of blockchain, more than most countries in the survey.
Elsewhere, statements from China’s People’s Liberation Army have caused some concern in the West. In a 2018 article, the PLA described how the technology behind Bitcoin could have military applications, including in its intelligence operations and in protecting weapon life-cycle data from cyberattacks.
According to Jahara W. Matisek, assistant professor of military and strategic studies at the U.S. Air Force Academy, the journal article was written specifically as a call to action. He quoted the PLA directly in his article in the journal National Interest, which said, “If we do not take precautions in keeping with the pace of the times, we will be subject to control everywhere.” Matisek commented on the quote:

Russia
More than two years ago, the Russian news service Tass announced that blockchain technology might soon be introduced into the Russian military, but noted: “We should be cautious when approaching new technologies, study them in detail because they always carry not only new advantages but also new unknown risks and threats.”
In 2018, the Russian Defense Ministry announced it was launching a new research lab to study how blockchain could thwart cyberattacks. It hoped to build secure blockchain-based platforms to make it more difficult to hide traces of cyberattacks and track online intruders into its systems, according to Adams.
South Korea
In April, South Korea’s defense department announced a blockchain pilot program to prevent external tampering with its military supply chain. Kim Tae-gon, coordinator of the National Defense Agency, called blockchain technology “one of the core technologies of the 4th Industrial Revolution.” He added:“The history of the entire process from bidding, evaluation, and results for defense improvement projects will be recorded on the blockchain, enabling more transparent management of the company selection process.”

The team, from the security lab of the Chinese tech giant Tencent, demonstrated several ways to fool the AI algorithms on Tesla’s car. By subtly altering the data fed to the car’s sensors, the researchers were able to bamboozle and bewilder the artificial intelligence that runs the vehicle.

In one case, a TV screen contained a hidden pattern that tricked the windshield wipers into activating. In another, lane markings on the road were ever-so-slightly modified to confuse the autonomous driving system so that it drove over them and into the lane for oncoming traffic. Leading a Tesla astray might not seem like a strategic threat to the United States. But what if similar techniques were used to fool attack drones, or software that analyzes satellite images, into seeing things that aren’t there—or not seeing things that are? Artificial intelligence-gathering
Around the world, AI is already seen as the next big military advantage.

Early this year, the US announced a grand strategy for harnessing artificial intelligence in many areas of the military, including intelligence analysis, decision-making, vehicle autonomy, logistics, and weaponry. The Department of Defense’s proposed $718 billion budget for 2020 allocates $927 million for AI and machine learning. Existing projects include the rather mundane (testing whether AI can predict when tanks and trucks need maintenance) as well as things on the leading edge of weapons technology (swarms of drones). In July 2017, China articulated its AI strategy, declaring that “the world’s major developed countries are taking the development of AI as a major strategy to enhance national competitiveness and protect national security.” And a few months later, Vladimir Putin of Russia ominously declared: “Whoever becomes the leader in [the AI] sphere will become the ruler of the world.”
Battle bots
On a bright and sunny day last summer in Washington, DC, Michael Kanaan was sitting in the Pentagon’s cafeteria, eating a sandwich and marveling over a powerful new set of machine-learning algorithms.

A few weeks earlier, Kanaan had watched a video game in which five AI algorithms worked together to very nearly outmaneuver, outgun, and outwit five humans in a contest that involved controlling forces, encampments, and resources across a complex, sprawling battlefield. The brow beneath Kanaan’s cropped blond hair was furrowed as he described the action, though. It was one of the most impressive demonstrations of AI strategy he’d ever seen, an unexpected development akin to AI advances in chess, Atari, and other games.

Blockchain and AI might have been predicted in 1984 with the Terminator Movie. Could we be building system that will eventually be used against country to country in the fight for natural resources? If this were to happen and the West’s AI and Blockchain Decentralized System network with Chinas de-intermediarization blockchain and go off to fight the humans for the purpose to save the Earth?

When talking about blockchain, many people are talking about “decentralization.” I’d like to make a small change to the word. I think the essence of blockchain is “de-intermediarization.” There is no way to get rid of the center.

Instead of millennial entrepreneurs, it’s the People’s Bank of China that will take the lead on cryptocurrency, and might well become one of the first major central banks to issue its own digital currency. China’s authorities have also discussed (link in Chinese) setting up a blockchain regulator to supervise the industry. In other words, the Chinese government wants to harness the power of blockchain technology, as long as it’s blockchain with Chinese characteristics. This notion rejects many of the fundamental ideas associated with blockchain and cryptocurrencies.

“They want to do what they with the internet—regulate it, and have their own version which they can control,” said Chu.